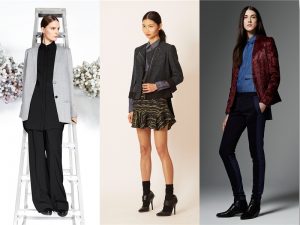 Who says blazers are a man thing, even women love flaunting designer blazers as and when possible. It is one of the most versatile attires for women as it could be worn as a casual wear sometimes, and can be carried off as a formal wear too. In case of men’s designer blazers, there are certain rules which must be taken care of, but in case of women’s blazers, these rules are somewhat flexible in nature. We will try and educate you about the basic guideline for buying a blazer for yourself so that it is absolutely flattering to your body and looks stylish too at the same time. Let us now scroll down and find it out.

The style factor could be sub-divided into two, basically based on number of breasts a blazer has and the blazer buttons. In case of single breasted style, both the sides of your blazer meet each other through the button which is there at the center of your torso, whereas in case of a double breasted style, there are two rows of buttons. As far as the number of buttons is concerned, a blazer could have a single button, two buttons, three buttons or even more than that.

A woman’s blazer could have four different types of lengths, namely waist length, cropped blazers, hip length and long blazers. The waist length blazers end at the waist of a woman and are very flattering to her body. Cropped ones on the other hand end slightly above her waist. Hip length blazers are the traditional kind of blazers, and lastly long blazers are the ones which cover the hips totally.

A blazer could be made out of varying fabrics, like wool, cotton, silk, leather, lace, satin, linen, synthetic etc. It totally depends on your choice and need as to which fabric you wish to pick.

Just like material, a blazer could come in varying colors and you could pick the one that matches your taste. For a formal look, go for black, grey and navy colors, whereas you could always go for vibrant colors like yellow, red, orange for a casual look. The patterns also range from conservative to bolds, like stripes and plaids for a formal appeal and floral prints for a casual look, the choice is all yours.

So, now that you are clear about the basics of buying a blazer, it is time to do some shopping. Isn’t it? These days you could easily shop for all sorts of high-end designer wear and accessories online via various online luxury stores. These stores stow alluring range of designer accessories and apparels for you in varying designs and patterns. You could completely rely on them for the quality aspect, as they stow only genuine products on their website. Some of the well-known and renowned luxury stores for your online apparels and accessories shopping are Elitify, Tata CLiQ Luxury, Darvey’s etc to name a few.